This year's Oscars showed that disability stories and issues are strongly in the public eye. And that's the mission of a group that's moving the needle of awareness, one story at a time. I talked to Celia Hughes of Art Spark Texas about Opening Minds Opening Doors, a program helping anyone, anywhere tell their own story and open people's minds.

Posted by Wheelie at 6:17 PM No comments:

What happens to people in wheelchairs in a fire emergency after they shut down the elevators? I found out 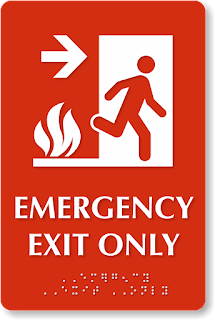 I just finished Occupational Therapy when the alarm started flashing. The voice came over the PA: "This is not a drill. The elevators have been shut down. Please go to the stairways. Staff will help people using wheelchairs and others who need assistance."

The staircases got stacked up, so we waited in the hall a few long minutes. No one was freaking, but it was tense. An OT came to me: "We'll have to transfer you to a lighter push chair, or the medi-lift." I said, "Whatever you think best."

I u-turned in the crowded hallway and we backtracked to the gym, where three OT's lifted me onto the medi-lift. It's a long sheet of durable plastic (1 inch thick? everything was moving so fast) that was unrolled on top of the therapy bed. One OT secured my head on a pillow, while two others by my feet each grabbed a long strap to pull me through the hallway and down the stairs!

My OT turned and said, "Bet you didn't think you would get a sleigh ride today."

I said, "Mush! Mush!" Actually I was biting my tongue not to be the Red Buttons character cracking dadjokes in the Irwin Allen movies: "Two blind guys run into an emegency exit..."

Mostly they carried me downstairs and were very careful. I only things I felt were a light bump at the top of the steps and another on the landing. Luckily we were only on the 2nd floor (I was having flashbacks to my old job and expecting it would be 14 floors).

Outside, the entire building was evacuated, standing around in fortunate 60-degree weather. They laid me on the sidewalk just as the firetrucks arrived. It turned out to be a false alarm - an electrician set it off without even knowing.

Hats off to all the cool-as-cucumber healthcare workers, proving once again that heroes wear scrubs. As a kid from Chicago, one thing I was missing is toboggan rides - so they gave me one, all right, one last toboggan ride I'll never forget.

Posted by Wheelie at 5:59 PM No comments: 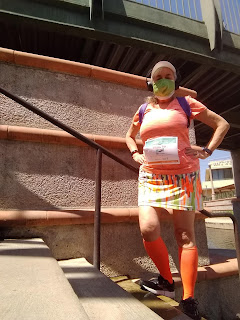 This sassy gal walked 5 miles for MS today. It was Virtual WalkMS and she took it to The Woodlands, TX, walking along the waterways around Cynthia Woods Pavilion on a gorgeous spring day. For her uniform, she treated herself to some color. She's all smiles when she wears it. 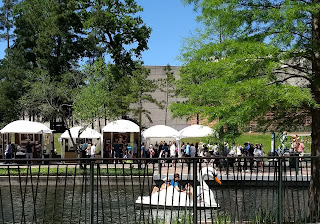 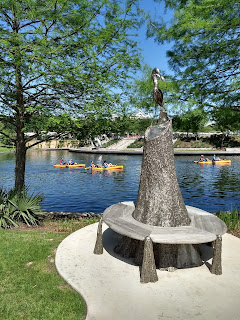 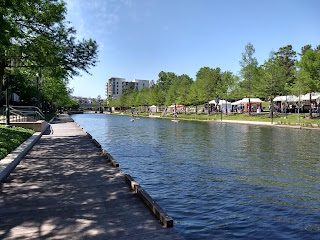 It was a perfect spring day and you could hear that sunshine in her voice. She had so much fun.

The National MS Society is holding Virtual WalkMS all year round to accommodate immuno-compromised participants. Aided by a cool virtual experience website, the Walk MS Interactive Experience, they're encouraging all to get as creative and fun as they wanna be: let your freak flags fly.

I spoke to Amanda Payne of NMSS about this year's special event to get through the pandemic:

Exercise only makes her rev up higher. From there she went to the grocery store and we had something to eat. Later, we exercised together: we have been doing a routine of some sort every day this year – today was day 100.

Cheers to my champ!

Posted by Wheelie at 8:27 PM No comments:

With a chronic illness, you have to focus not on what you can't do -- but what you can...

You've got this one life and time's ticking...

You're a fool if you just sit in your own shite all the time and don't look up at the sky...

Just because things didn't go the way you planned, guess what? It doesn't go according to plan for anybody else either...

That was a column I was reading, words to that effect.

Ah, shaddup! is what I was thinking.

Which is funny because the column in so many words summed up my approach to MS. I mean, I don't say things like that to others, but the self-talk in my head cycles through things like that all the time. But sometimes you don't want to hear the spiel, right? Not even if it's your own.

I kept reading though, because it was written well and I was almost through it. And it turned out to be a good piece, because before I got to the end it had sent my mind off spinning in its own direction, like what a good book will do to you. The author said not to focus on the things you've lost, but the things you've gained. Which makes for tricky math. You've got a lot of things on the one side, and not as many on the other. Do they balance out? Only if the things gained are a lot bigger, more substantial. Disability toughens you: plus. It makes you more resourseful: plus. I guess in a weird way, disability brought me my wife, because neither one of us was in it to get married. Our attitude toward marriage was more like, 'Ick.' But things changed, kind of fast, which is a whole other story. Bottom line, I got the girl, even if I had to get disabled to do it. Jackpot. Gotta do what you gotta do.

But while reading that column about losing things, images flashed through my mind. One of the first was giving away my guitar. A guy loves his guitar. We were literally attached at the hip for a dozen years. I walked around with it everywhere. It was a black '84 Fender Stratocaster, and it was all mine. But my fingers eventually were no longer mine. I loved playing but was never wizard, and yet my playing grew sloppier still. A lot of playing is muscle memory: practice practice practice and you'll play better and faster. But I was going the opposite direction. My fingers were unlearning songs. In the middle of jams, the guitar pick shot out of my hands like a bullet. There came a time when the guitar never left its case, and when the case grew dust. I scarcely noticed because life had become so tiring that simply going back and forth to work and school left no time for guitar anyway.

Times with my friends were rarer too, so once, when one of my best buds was leaving my apartment, I happened to spot the guitar standing in the corner. I didn't think about it beforehand, but I told him to take it. Of course it had to go to him, the only one of us with talent and seriously playing anymore. His bands would go on to play the big Chicago clubs on Saturday nights. It was instantly clear to me, so I said to take it with him. I had to say it twice because he didn't understand. I didn't either, I just wanted it gone. That and the acoustic, a chunky strumming guitar. That was a helluva weird feeling afterward. Notice how detailed this got? It's like telling your friend about a breakup. A guy loves his guitar.

I don't remember getting a mobility scooter, or getting approved for disability, or getting the blue parking tag, but I remember that feeling of my guitar being gone so well. I'm feeling it right now. I felt it while reading that column.

That was years ago. Water under the bridge. I think I saw it once in all that time. I couldn't play it, so who cares anymore? We broke up. But here's the cool wrap-up, the thing gained.

My friend's son, who is my godson, grew from a little train fanatic into a tall, cool teenaged bass player like his daddy. And just like his daddy, he's fronting garage bands. In the past year photos surface of him slinging a guitar that's looking mighty familiar. He's made a couple slight modifications to it, and I'll admit wtf'ing at first sight. But a guitar is a very personal thing. A guy loves his guitar. So you'll do what you want to make it yours. The Strat's his, and they look right together. I'm loving that. I got the girl, he got the guitar. It's a crazy life, ain't it?

I also have admit something else that says everything turned out just the way it was supposed to. Because honestly, truly, I totally sucked at guitar.

Last year we took the Pequod, our RV, on an epic (for us) trip along the Gulf Coast from Houston to the Everglades. We were gone for a month and had a blast. On our way back they closed the Louisiana border behind us. So began the pandemic. We took that trip at just the right time, and thank God we got back with all those great memories. I was looking at Mardi Gras too on the way back, which turned out to be a super-spreader event. But we missed that as well. Whew.

Last week we took it out for a week at Lake Corpus Christi State Park. Saw some cool stuff: Padre Island National Seashore, Goliad, Corpus Christi, and discovering the state park itself. We were having such a good time that we seriously wanted to extend the trip to another site. But we decided against it, and returned a week ago, Saturday. On Sunday, historic statewide winter storm began. If we had been out there another day, we'd have been screwed. 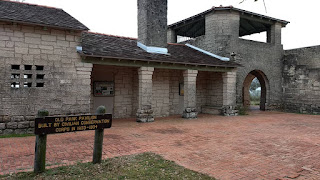 Posted by Wheelie at 9:06 PM No comments:

Obi is a robotic eating aid that is great design: both simple and powerful, it restores independence in eating. And it makes life better, for 4 years now! 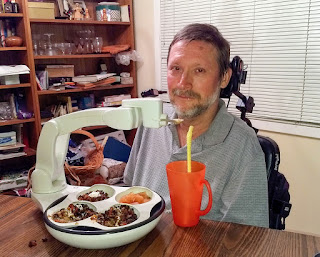 On this hellday, hypnotized by horrible images, I'm sooo looking forward to a chunk of sanity to grab onto. Something nice and predictable and boring. I'm going to play Mr. Fish again. 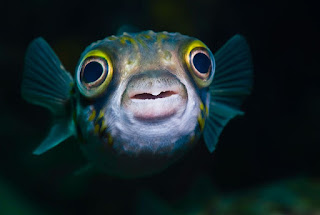 During the lockdown my wife @char2go and I started drifting. It was a weird, anxious time for all. So what we tried was to exercise to a YouTube video together. It could be short, it could be easy, but we tried it. Then we tried it a second day, and then a third, and eventually it became our habit that we laughed about and looked forward to every day.

I'm a quadriplegic, she is not. She does all the movements, I do few if any. But I flop all over the place. I flop around like a fish out of water. It ain't pretty. But every day I do so, and I laugh and by the end I'm out of breath just like she is. It became our routine, boring and beautiful.

BTW congrats to my lovely @char2go for helping ring the closing bell yesterday with @PlanetFitness on the New York Stock Exchange! The sky's the limit, Coach. 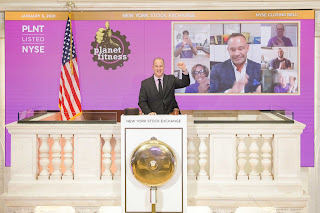 Wheelie
I sat in a room for 25 years and now I'm busting out! Guy with MS + a mighty wife with a stair-climbing fetish + a toyhauler RV ISO wheelchair-accessible America = a blog entirely written from a wheelchair pov. Let's swap cool camp sites, tips, vegan eats. Baby, we were born to run!